How can design thinking and methods help organizations better understand their challenges and transform from the ground up?

Themes: Patient Experience, Service and Organization Design, Design Research, Vision and Planning
Goals: Our team was engaged to examine patient experience within an out- patient facility and explore opportunities for the facility to become a “model for the future of healthcare delivery.” Research informed visual models, and models aided design concepts that sought to alleviate pain-points in the experience for patients and families. This set a foundation for organizational transformation.

We began initial stakeholder interviews and toured the three story, 120,000 square foot facility. We were also briefed on prior research on patient satisfaction that had been conducted but never acted upon. The facility tour covered the building’s waiting areas, central cafe, and back-offices. Natural light entered the core of the build- ing through a central atrium. Our team photographed the interior and exterior physical plant, existing services, pathways, wayfinding systems, waiting areas, surgery and recovery rooms, staff offices, document storage, technology and tools, accessibility features, and more. Complete documentation helps design teams create accurate models and flow charts and keep them mentally “in place” while working in their own space.

Documentation began even before the initial walk- through: our team struggled to find UPMC South Hills because the exterior signage was blocked by trees

and the facility itself poorly marked and obscured from the main road. When we arrived and looked for the administrator’s office, the directory had well over a hundred listed locations, none of which included the admin’s office. Overhead signage also proved unhelpful.

While we branched out and conducted exploratory research in as many facilities as possible, eventually choosing the surgery center as an opportunity with the highest number of patient engagements on an annual basis.

We met Barry Hume and his wife Deborah. Barry was having knee replacement surgery and was referred to UPMC South Hills because of its proximity to their home. The Humes scheduled surgery day six weeks ahead of time and had two phone discussions with the nursing staff and received one final reminder and check- in phone call the day before surgery. They arrived at 8 AM, their first time at UPMC South Hills. To expedite patient arrival and to make them feel more welcome, the nursing staff waits outside a dedicated entrance for the surgery center and warmly refer to it as the “celebrity entrance.” Deborah left Barry with the nurse and parked their car.

Our team shadowed Barry and Deborah. His surgery was successful and he spent the rest of the afternoon in recovery before being discharged at 5 PM. Both said they were pleased with the experience. This was echoed by many patients and family members: the experience is great. The staff makes patients feel as comfortable as possible; they check in on them in the days that follow; they express genuine care and concern for everyone’s wellbeing. These findings were also reflective in the internal surveys that our team inherited which showed an overwhelming levels of satisfaction. Three days later, the Humes brought a birthday cake for the nurse who took care of them.

Had our research at UPMC been solely analytical, only a partial picture would have emerged — patients would have been seen as broadly satisfied. Instead, by employing and synthesizing a variety of methods, deeper organizational issues were exposed: 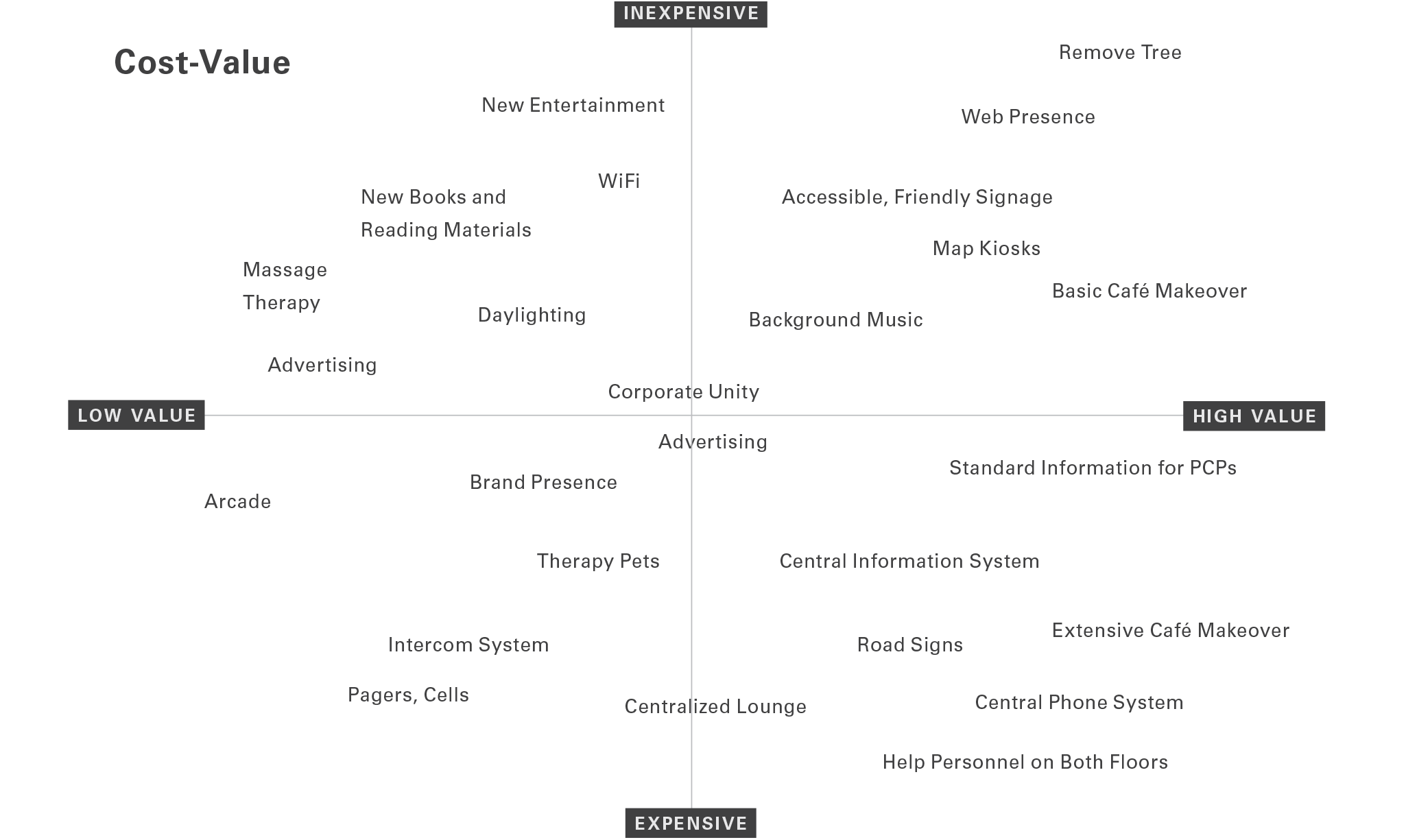 Understanding ‘healthcare of the future’ begins with understanding people just as much as it does technology and advancements in medicine. For us, it meant leaving South Hills and integrating with the community…

Steve Jobs and Henry Ford are both credited with saying that users don’t know what they want — that they can only talk about iterative changes, not transfor- mative ones. While it’s true that future visioning does not come naturally for most people, it becomes much easier when participants are prompted with artifacts to generate ideas and offer feedback.

As we prototyped the cafe, waiting rooms, entrances, hallways, and processes, we gathered feedback through diaries, forms, and co-creation tools like sticker blueprints and drawings. It helped our team get a quick sense of what resonated and was flexible enough for instant adjustments. Methods like these also collected new ideas from the participants themselves. It was efficient, immediate, and cost-effective.

A Pivot Towards the Future

Our team was invited to meet with a corporate steering committee looking to improve experiences at their mid-size outpatient centers. Aside from addressing the poor wayfinding, brand awareness, and digital footprint, they asked us to scale up and envision how South Hills could become a “satellite facility of the future, serving as a model to others nationwide.”

It was an opportunity to reach ahead and not one that could be understood through linear, problem-solution thinking. Nor was the future going to be defined by moving furniture around. Prototyping new physical space has value in very direct ways to patients, families, and staff, but upstream work leads to more cohesive design with broader impact and cost efficiencies. The complexity is greater but so is the impact and value.

We conducted another competitive analysis to understand innovative approaches to healthcare delivery around the world. At the time, “design thinking” was a relatively new term to business, and outside of Mayo Clinic we were the only ones explicitly practicing service and organization design. And we knew that whatever we learned from competition would merely inform us but not help us design models for Western Pennsylvania. Successful design solutions are suc- cessful in part because of contextuality. An idea that resonates in Rochester, Minnesota is never guaranteed to work in Bethel Park, Pennsylvania or Downtown Pittsburgh. Factors that influence the success of a design outcome: nuanced market demands, community and culture, workforce culture, staffing models, and more. Giving all solutions the broader organizational support would be crucial to a impactful change.

Understanding “healthcare of the future” begins with understanding people just as much as it does technol- ogy and advancements in medicine. For us, it meant leaving South Hills and integrating with the community, starting at a nearby mall on a Tuesday morning. The research was completely informal, unstructured, and randomly selected. We bought coffee for mall-walkers, talked with employees, and recorded their stories. No data came from it aside from the revelation that asking “what does the ‘future of healthcare’ look like to you” yields almost no tangible insights. Like product design, unless people are guided in specific ways to think about the future, they will struggle to articulate it.

Most research methods are focused on the cusp of iterative change; far-futuring activities yield tropes of science fiction. We needed to understand latent needs but thirty years out. To complicate the research, healthcare is sensitive for people. Each participant brings their own experiences and openness may be hard for many. And lastly, thinking thirty years in the future was an entirely unreasonable proposition for the aging population of Bethel Park.

We employed a remapping technique to understand the values of individuals and community ethos: prompted with a set of four image cards per question, users were asked “if healthcare in the future were” one of the

four juicers, one of the four magazines, one of the four vacation spots, one of the four cars, “which one would it be and why?” The choices they made were irrelevant to us; what mattered was their justification: “I like the green juicer because it’s personal. It’s one-at-a-time. With the industrial juicer, I would feel like just another orange.”

I like the green juicer because it’s personal. It’s one-at-a-time. With the industrial juicer, I would feel like just another orange.

Between juicers, vacations, and media, we collected hundreds of data points that spoke to desires of comfort, accessibility, brightness, efficiency, happi- ness, peace, relaxation, individuality, immediacy, and simplicity. We ran a linguistic analysis and the results helped us construct a vertical map defined by the community itself.

The vertical map stemmed from the lack of vision for South Hills and UPMC’s many other satellite facilities. While we could continue to prototype valuable ground-level changes to influence patient experience, they needed to be part of a broader plan, a strategy, and a vision — one that balanced stakeholder perspectives and constraints, patient-centered values, and commu- nity ethos.

Every organization creates mission, vision, and values statements. Sometimes those are loosely tied to strategic plans. Rarely are those aspirational narratives tied to action plans, and if they are they remain high level. While they can be motivational for members of the organization, they are often times too abstract.

This framework articulates the vision statement with clear principles, and goals share and ladder up to those principles. Goals and associated projects can be mapped to budgets, timelines, teams and business units, KPIs and OKRs. Operationalizing a vertical map is like enacting a budget plan — but the vertical map is a structured and action-oriented narrative instead of numbers.

With other clients, our vertical maps have adapted to unique organizational structures and needs. Multiple visions, for instance, all under a company-wide vision; strategic plans inserted between goals and principles; workstreams at the bottom with teams in place to execute. Like all good design, it responds to context, flexing to the realities. It creates order from the messiness, and legibility and clarity amidst the layers of complexity.

At UPMC, the vertical map was delivered as part of a larger comprehensive strategy and workbook that detailed project possibilities, proposed strategies, cost-benefit, research insights, and a high-level road- map for action. Success would depend on empowering people across the organization with tools, fostering the work, and iterating to make sure solutions have resilience.

Design is a values-driven and action-oriented profes- sion. We sought to create a healthier organization and healthier community through the patient’s eyes.